Milk and Honey book review illustrates that it is a bestselling book by a Canadian poet Rupi Kaur, published in 2014. It is a collection of prose and poetry, which consists of four parts; The Hurting, The Loving, The Breaking and The Healing. Each part of the book serves individually, but all parts of the book are co-related. The book mainly deals with severe issues of female’s life and their problems. Being a female, Rupi Kaur has composed this book for women mostly. She has highlighted the issue of child abuse and sexual assault. 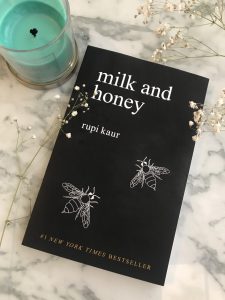 The first part of the book, ‘The Hurting,’ is mainly subjective as it consists of autobiographical elements of Poetess’s life. Being a victim of sexual assault in childhood, she describes boldly about her personal experience of sexual assault. Moreover, how she overcame her problems and fights for her family’s survival. The poet dislikes society of injustice and discrimination. She is against a male who’s dominating the society, and she also grudges against the law of treating a female like an animal and only a source of being a sexual pleasure. Through her poetry, she depicts the character of her father; that how he used to mute her mother.

“My father shoves the word hush

Between [my mother’s] lips and tells her to

Never speak with her mouth full

This is how the women in my family

Learned to live with their mouths closed”

According to the book review of Milk and Honey, the second part of the book, ‘The Loving,’ deals with a love theme. The subject matter of the poems included in this part of the book is love and fidelity. Married can enjoy this section of the book as the lyrics resolve their problem of living together for so many years. These poems show her frustration against abuse.

She tells us that girls are abused by their close relations such as brother, father, uncles, cousins or family friends. She grudges against dominating male society, and she also highlights the psychological problem of girls. Her father sexually abused her in her childhood. Her father told her about the importance of her beautiful body.

Milk and honey review shows that the third section of the book, ‘The Breaking,’ once again brings the readers back into the black part of the author’s life. Some pessimistic elements of life will change the mood of the readers, and they will begin feeling sad. This part of the book is helpful for those who have to meet with tragic circumstances in their life, like break up in a relationship.

This part of the book is the longest of all other components. She shares her experience of falling in love with a boy and then the breakup of her relationship with him. She begins to forget him slowly over time. And she also describes what she has learned by breaking of long term relationship with him.

Milk and Honey review shows that the last part of the book, ‘The Healing,’ describes the real purpose of the poetess for composing such poems. These poems clearly show the author’s interest in feminism. Through these poems, the author tells women how to be empowered and fight for their rights. The poems of this part are brief and proverbial. These poems are easy to learn and quote in daily usage.

I like this book very much. The title of this book inspired me so much that I decided to read it but after a review of the book I enjoyed and thought that my decision of choosing this book was not wrong. Rupi Kaur has derived the book title ‘milk and honey’ from Exodus, in which God has promises man to give the land of milk and honey. So, how about grabbing one copy for yourself, ladies.