A Storm in a Teacup 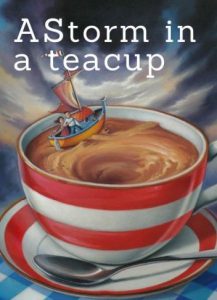 Lack of tolerance is the main cause of brawls, killings, suicides and other brutal acts. Unfortunately, we come across every day a storm in a teacup everywhere. On a very trivial matter, people get infuriated with each other for nothing just to show their strength as rascals beat innocent street people, vendors and shopkeepers to show them how much power they possess. Cold-blooded dictators do not care for the value of life, their prime selfish motives are to achieve domination, power and pelf. Countries had been fighting wars to press their neighbouring countries and nations by occupying more piece of land to prove superior so that they could protect their lives and suppress other nations. People go to skirmish because they are angry or afraid or both. In some cases, human nature urges to fight for becoming a superhuman or to be called as strong as a tiger. In this modern era, people are losing their temperament and tolerance level very rapidly for trivial things and expose themselves by their demeanour.

Here a question arises that does education change a character? A survey report tells us that education does not change the character. Guido Vitolo from Italy wrote in his comment, “No doubt education change your personality you become wiser but sometimes highly qualified people holding PhD degree are utterly stupid”.

“Educated are socially polite in all circles and exhibit tolerance of others”.

Maura Rudd from Northeastern US said,

“I don’t think education will make someone rude. It is a character flaw.”

William Shakespeare had defined with very dexterity character flaw by writing his plays; particularly he had beautifully defined character flaw in his play “Hamlet”. By presenting two parallel characters Hamlet and Laertes side by side, he told the readers that education and good training could not change the inner soul or moral character of Laertes.

So we must not put our fingers in our mouth when we come to know about some highly qualified persons on brawls. If they have to meet someone who behaves against their desires they lose their temperament and start brawling.

Whole Pakistani nation and people across the border remained stunned when a fight broke in the National Assembly on Thursday, 26th January, 2017 between members of PTI and PML (N) after a harsh exchange of sloganeering between members of both parties.

This act of brawl is irrational and it must be denied but our innocent nation must be aware of the fact that such a storm in teacup has not broken out first time in Pakistan National Assembly but in 2015 it broke out in Japan Parliament, in 1972 it broke out in British parliament and similar cases of fight have often been breaking out in the National Assembly of US. The truth is that politics is a stressful job, therefore, such incidents may often happen.

The speaker of the National Assembly remained stunned and helpless to detain such a sudden brawl which broke out on account of the slogans against each other. Minister of petroleum Shahid Khaquan Abbasi proceeded to the opposition bench both of them exchanged harsh words. Meanwhile, Amjad Niazi slapped on the face of Shahid Khaquan Abbasi, in his response, Moeen Watto slapped on the face of Amjad Niazi. Speaker of the House Sardar Ayaz Sadiq blamed Qureshi for the contention. Later on, the proceeding of the House was suspended for fifteen minutes. When the session started again, members of MQM and JI walked out in a protest against the incident.

Another tumult broke out in the Punjab Assembly on Friday, 27th, 2017 with the same slogan which had been raised a day before at National Assembly. Though the reasons for breaking out tumult were different, the quorum in assembly was not enough to start a session. When a member of PPP pointed out quorum’ strength, a member of JI got it ill thus the fight broke out. Legislators from both sides of the political divided at Punjab assembly raised the slogans against each other. KPK Assembly is also not spared from such petty issues. It seems that the clouds of lack of tolerance have enveloped the atmosphere of the assemblies. 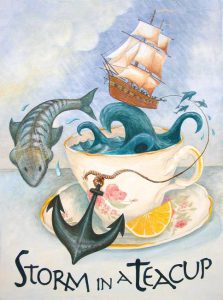 I’m shocked to drag my readers’ attention to a wrangle erupted between the groups of lawyers at the Punjab Bar Council over the issue of election results on Monday 30th January 2017. The dispute spoiled the decorum of the council. The reason behind the eruption of the dispute is the council election on 28th January, the chairman AGP issued the notification declaring that Malik Inayatullah Awan from the independent group of Asma Jahangir was a winner candidate for the office of vice-chairman. Whereas Jamil Bhatti from a professional group of Hamid Khan claimed that he was elected vice-chairman. Thus the wrangle emerged between the supporters of Malik Inayatullah Awan and Jamil Bhatti.

Such types of storms in a teacup are alarming. I am not in the position now to call them funny disputes these are alarming, fatal and dangerous. If highly qualified people can’t enhance their tolerance level and cannot ignore to forgive the mistakes of each other then they must burn their degrees. Once my teacher asked me, “If you want to probe someone’s mind flare him up, you‘ll better come to know about his personality. Because in anger inferior and malignant people forget all about themselves, losing their temperament they expose their demeanour”.

In fury, they behave just like animals and sometimes animals and the whole creature in the air also mock at them. People in fury, ego and arrogance forget their Lord. Thus their arrogance snatches their senses; they utterly become blind to see humanity.

Let me conclude with prayers for the future of inhabitants of my fellows of homeland particularly those who are highly qualified and responsible members of the society, May Allah bestow them endurance, tolerance and peace, amen!